For the last century, Lantana was a scourge in Hawaii.  Despite its pretty posies of pink and yellow flowers, it was very invasive across the dry lowland pastures of the islands.  The birds eat its berries and so aided in the spread.  The plant is toxic to the cows, goats and horses that are living in those pastures. Over the 1900s  a few attempts were made to bring insects into Hawaii the would act as biological control.  The plant has not been totally eradicated but it does seem way more under control now.  The wild Lantana is not one you want in your garden despite how pretty those little flower heads look. 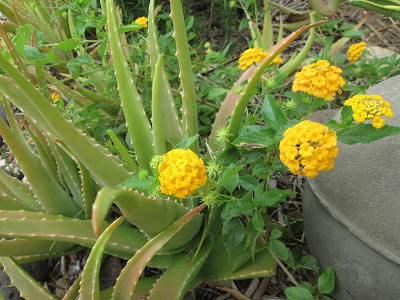 Thankfully, horticulture science has come to our aid by developing unfertile cultivars that we can now grow in our gardens.  If you need a colorful display in a hot dry garden this is the plant for you.  Several years ago I saw it used extensively in public gardens in Egypt and admired its toughness there.  I have it growing at the front edge of my yard where it next to a hot cement driveway. The soil is sandy and there is full sun all day.  The Lantana handles it all along with other super tough plants like Aloe Vera and Rosemary. 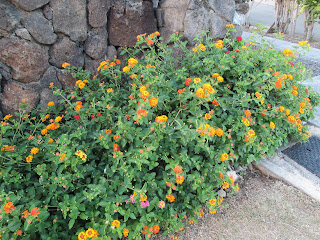 Several cultivars are being sold to choose from now with a big spectrum of colors.  There are whites, creams, yellows, pinks to orange and reds.  The plant has a rather musky smell but I do not find it unpleasant. Lantana needs very little care once it is established.  Pinching the tips or giving the plant a light trim  will prevent it from growing leggy or too high.  The plant does need to be watered frequently to get established but after that it will look good with a weekly drink.  It does not like lots of fertilizer and any disease is usually caused by too much water or poor drainage.  Although Lantana is a perennial plant in the tropics, it is best to replace them every few years to have a healthy looking show.

New plants can be propagated from the stem tips.  Use rooting hormone to help as they are a little difficult to get going under home conditions.  A big added bonus with Lantana is that its flowers are loved by the bees and butterflies.

Posted by Stellamarina at 12:18 PM