Growing a regular western style vegetable garden is not really my thing.   For one, growing vegetables in a tropical climate seems more difficult because of soil problems, rampet weeds, insects and disease.  The other reason is because I am a lazy gardener who does not want to spend a lot of time and effort with fussy plants.  I am also very cheap.  I like the idea of growing free food and recognise that eating fresh vegetables is good for my health.

My search for easy grow edibles has lead me to a lot of interesting "spinachs" that come from many different cultures around the world.  Usually these "spinachs" are some wild growing perennial plant in their place of origin that was first just gathered. Now they are propagated, usually by cuttings, and grown in the garden but need very little care.  You get the plant established, and just pick the leaves or young shoots as needed.  My type of vegetable gardening!  In this blog you will sooner or later be introduced to lots of these spinachs.  The first one I want to introduce you to is Okinawa Spinach as it is called here in Hawaii. 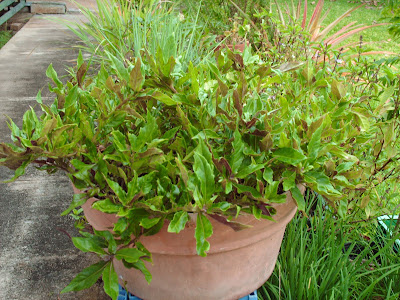 Okinawa spinach is an Asian leaf vegetable that is very easy to grow in any kind of soil and in full sun or semi-shade.  It has few disease and insect problems except one.....the slugs love it.  This is why I grow mine in a large tub up off the ground.  It is easy then for me to check for slugs on my weekly hunts in the garden with my flashlight before I go to bed.  The slugs get chopped with my garden knife.  If this plant is left to grow on the ground it can develop into a high and thick spreading ground cover that needs tips harvested frequently to keep it in control.  It would be good for that rocky unused slope in your garden.

I have not been able to find nutritional value information on Okinawa spinach but being a leafy green vegetable one would expect it to be a good source of minerals and vitamin A.  The raw young leaves can be added to a green salad,  I use this spinach most in stir-fries.  Because of the purple color on the bottom of the leaves it is a colorful addition.  I especially like to pair it with yellow sweet peppers to make a really pretty stir-fry and to sweeten things up although the taste of Okinawa spinach is agreeable on its own.

I have seen Okinawa spinach being sold at farmer's markets on Oahu, and you could easily get some started from a few cuttings. You can put the cuttings in a glass of water for a few days to get the roots started but make sure they are planted within 3 days or they will lose their vigor.

Around Christmas time my Okinawa spinach blooms.  It has fluffy little orange flowers on long stems.  I usually just cut them off to keep the strength of the plant going to the leaves. 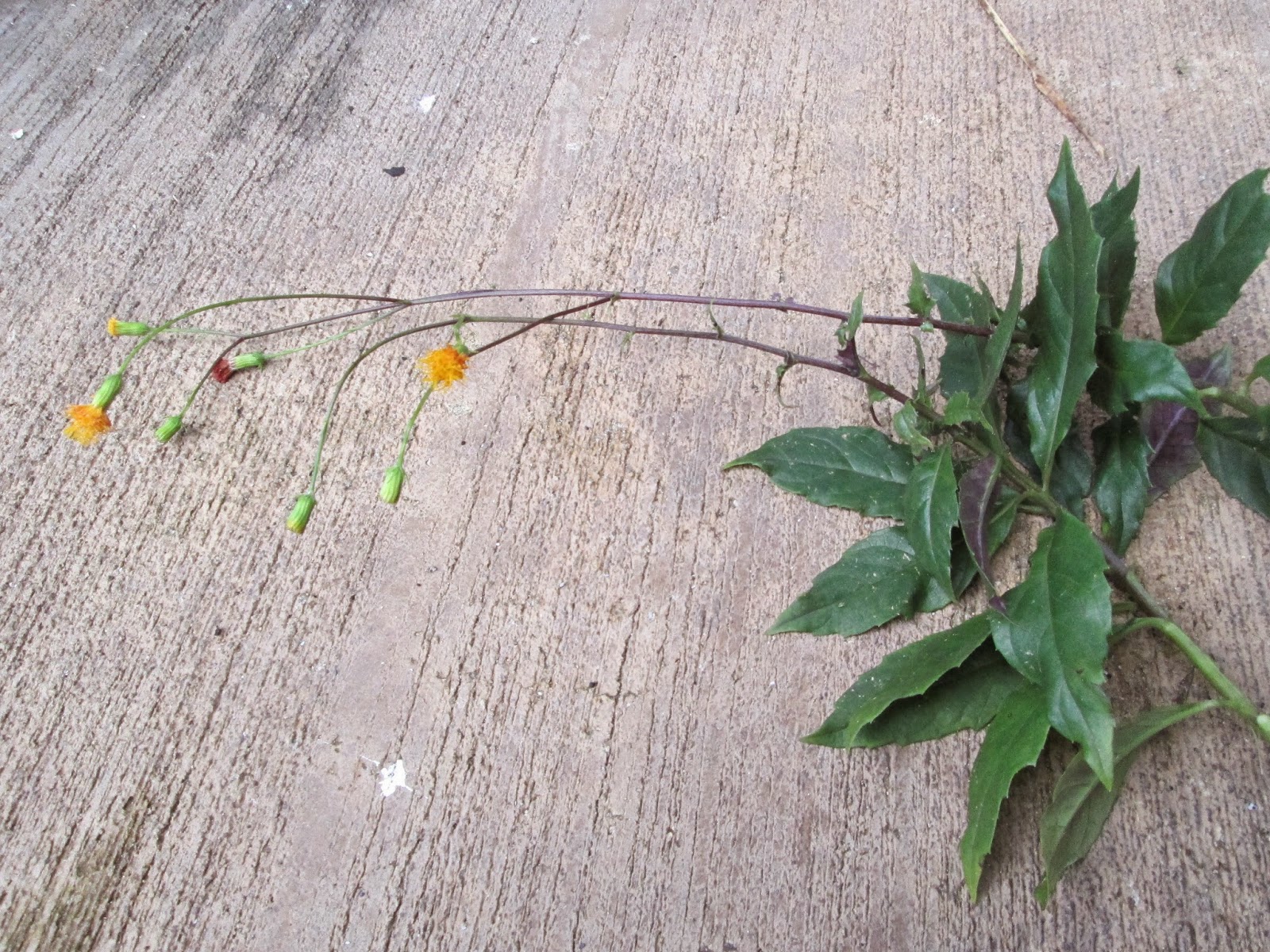 PS   After growing Okinawan Spinach for over several years now, I have decided that it is best to pull the plant up every few years and plant another one.  They just seem to loose their vigor and get aphids and root death from too much rain.  The thing is to get those new replacement cuttings going while your plant is still healthy and strong.  One plant in a large container is enough.
Posted by Stellamarina at 12:57 PM 3 comments: 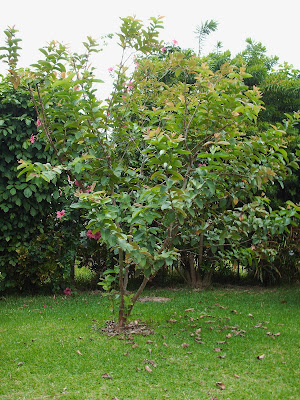 The common pink fleshed apple guava grows semi wild in Hawaii.  If there is a tree growing in or near your garden, chances are that it was established there by fruit eating birds.  Our next door neighbor has a tree in their back yard which kept me supplied with a daily guava on my way to hanging up the laundry in our back yard.  However, a new family with kids moved in next door and they needed to fence in the play area so that I lost access to the tree.  I decided then that it was time to get my own tree.

I was able to get some small trees growing by squishing a ripe guava fruit into a small pot of potting mix and leaving it out in the sun and rain.  When the seedlings grew to several inches I transferred them each into a one gallon size pot.  After they were well  established, the best and biggest got transferred into a three gallon pot and its tips were pinched to encourage it to to fatten up.  Within several months I had a strong tree a few feet tall and was able to plant it out in my front yard.  There I have been weeding the base area, fertilising, watering and pinching the tips of the tree.  I wanted it to be a fat, squat tree that will stay below the ocean winds coming over the tall garden boundary hedge.  Still the winds have given the tree a bit of a lean.  Because the tree was seed grown, I had no expectation of fruit for  five years or so, but within  three years it was supplying us with fresh guavas and now, a few years later, it is a lovely tree in the garden.  Sometimes the leaves get a little brown edged and tattered by the salt winds but the tree will replace these with fresh green ones.

I have long been a fan of guavas, liking them for their abundant supply of Vitamin C.  (Four times more than an orange.)  However lately there is even more support for the goodness of guavas because they have been found to be an even better source of lycopene than tomatoes.  You know....lycopene that helps give men protection against prostate cancer.  My husband will pick a guava as he walks out to the car to go to work every morning.


One does have to be quick on the draw if you want to get fruit to eat.  If you wait for the fruit to turn full yellow before  picking, you will be too late.  The dreaded fruit fly larvae will already be crawling through your guava or the birds (usually the red vented bulbul) will have started eating it.  I even see the wild chickens up in the tree looking for ripe fruit.  So the key to good eating is to pick the fruit when it has just changed from green to light yellow.  I might leave it on the kitchen bench to ripen up one more day.

My favorite way to eat guavas is in a smoothie made in a blender.  Yogurt, milk or juice, a frozen banana, a handful of ice  and one or two guavas.  Enjoy.  Oh...and the seeds are good fiber.

If you do not want the seeds then the best thing is to cook the fruit a little until they are soft and then put them through a sieve to remove the seeds.  It is just a matter of bringing the chopped fruit to the boil with a tiny bit of water and then letting it simmer until soft.  Rather like making apple sauce.  You can then use the pulp right away or freeze it for later for things like smoothies or making guava jam.

Good grief!  It has been 5 years since I wrote this almost first of my blogs.  I think it is about time to update the picture of the guava tree as it looks so tiny in the photo at the top of the page.  Now it is a big shade giving tree in the garden.  The top of it gets trimmed by nature...ie the salt winds coming over the top of the hedge, while I trim the sides off a bit when it reaches out too far.  This past spring we had strong salt winds which really burnt the leaves so that we have not had any guava fruit for months while the tree put all its energy into changing its leaves into nice new green ones.  Only finally now it it starting to burst full of fruit and the grand kids can help themselves again.  Because the tree is so big now we use it for morning shade if we want to sit out in the garden. 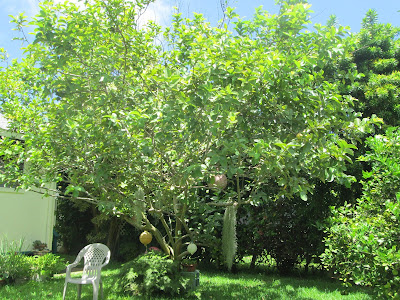