I have had bunches of Spanish Moss hanging on my guava tree for several years now.  In the past I was not that keen on the stuff until I saw how a lady in my neighborhood was incorporating strands of it in her leis.  Fortunately Spanish Moss seems to like Hawaii climate and it is happy hanging out on my guava tree.  Every several months I will divide  the thickest bunch up to start a new bunch. 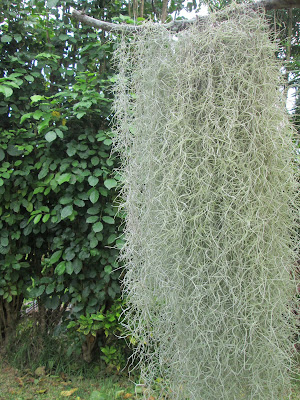 Because Spanish Moss is such a different type of plant it really results in a big learning curve in growing it.  Lots of interesting information to pass on to the kids.  For example:  Did you know that Spanish Moss is not a moss or a lichen?   Nor is it Spanish for that matter.  It actually belongs to the bromeliad family so it is related to the pineapple plant.  Look at just one strand of Spanish Moss and see it as a chain of tiny plants with the end one sending out a new baby plant and so on.  Then another thing.  This tiny bromeliad has tiny flowers....just like its cousins.    I have to admit that I learned about this from a garden facebook group.  A gardener was commenting about flowers on her Hinahina.   I am thinking, "no way" but I went out and inspected my Spanish Moss very closely, and what the heck?  There were a few tiny little mustard color flowers on my Spanish Moss and I had never noticed them for all these years!  That was in the summer time.  I do not see any out there right now.

Here in Hawaii, Spanish Moss often goes by a few other names.  One is Hinahina which in Hawaiian refers to the silver gray color of the plant.   The name is also used for a few native plants of a similar color.  Spanish Moss can also be called locally as Pele's Hair; a name that is also given to strands of volcanic glass.  Both names have a nice descriptive and local touch but Spanish Moss is not native to Hawaii.

Spanish Moss is native to the US South and on down through Central America, the Caribbean and into the northern part of South America.  In nature if just grows and hangs from trees and does not have roots that take nutrients from the tree.  These it absorbs from the air through its leaves.  Often people buy Spanish Moss and and hang it in their covered patio thinking it will be OK without any further care because they have heard it is an air plant.  Remember that in nature it will get rain.  In the patio, without watering, it will die.  Even my plants outside need watering in dry weather.  I just give them a spray with the garden hose.  Some people use spray bottles and others dunk the whole clump of Spanish Moss into a bucket of water for a minute or so.  About once a year I will give it a light feeding of  Miracle Grow fertilizer mixed in water using a watering can.  Although it can take sun, Spanish Moss likes partial shade.

My Spanish Moss just hangs over branches on the guava tree.  I notice the professional nurseries use small plastic net cups used in hydroponics to hang theirs.  The net cups can be bought on the internet.  The thing not recommended is any kind of metal hook or wire as the metal becomes toxic to the plants.  One guy on the internet uses those little plastic butterfly hair clips they use on orchids.  He likes to clip bunches of Spanish Moss on to other hanging plants.  It is important to to keep the plant strands hanging down and free so that the air can pass through.  This is a good reason to divide your clump when it gets too fat.

In the old days Spanish Moss was used for such things as insulation, mattress stuffing and packing material.  Now it is more likely used in arts and crafts.  I like to add a few strands when making a lei such as winding it around a single strand of crown flowers for extra effect.  It is a plant you can have fun with.  I notice the house finches like to sneak a few strands too when it is nest building time.

Aloha
PS   June 2020
So it is now June and summer time and the tiny flowers are showing up on the Spanish Moss again....go out and have a look.  Once you see one you will be seeing them everywhere!
Posted by Stellamarina at 11:40 PM 1 comment:

Another good garden article .....this time from the BBC.  Something for us retirees to think about.

Aloha
Posted by Stellamarina at 1:05 AM No comments: