Over the years I have made occasional attempts at growing tomatoes but with no great success.  New gardeners in town, who were tomato kings back in California or Utah, have given up in frustration and passed their tomato cages to me so I do not feel so bad.  However, after retirement, it seemed that it was time to get more serious about growing tomatoes and see if I could be a bit more self sustaining.  After all, I do eat a lot of tomatoes.  So, in April of last year (2016), I once again squished the biggest and best of the tomatoes I had bought that week and, after a day or two of drying it out, planted the seeds in a small pot.  The local tomato farmers grow only cherry and grape tomatoes so I decided to go with grape tomatoes this time.  Fruit flies are such a problem in Hawaii that growing large tomatoes is just a waste of time unless you are going to bag every fruit.to protect it.  I have found the golf ball size cherry tomatoes to be a bit difficult in the past too.

After getting a few small grape tomato plants growing I transferred a few into large container pots on in the kitchen garden area where they would get full sun.  Only one of these actually was alive a month later and eventually starting flowering and then producing tomatoes.  Not huge amounts.  Maybe a dozen or two a week.  But here is why I am writing about it.  Over a year later the same tomato plant is still chugging along and still giving me fruit. 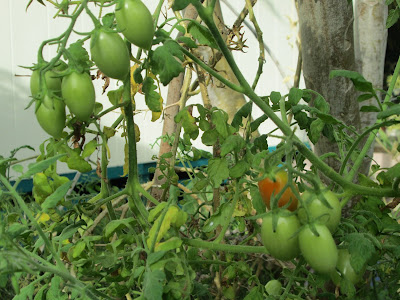 It is a skinny vine plant that has small leaves.  Its old leaves turn yellow and die off.   At first I thought it was diseased but after a while I realized it was just its habit of growth.  On doing a google search I find out that tomato plants are of two types.  Determinant and Indeterminant.    The description of the Indeterminant fits my plant to a T.  A long lasting vine which CTAHR says is the best for Hawaii growing conditions.  The Determinant plants tend to have lots of lush and fast growth of leaves and fruit but do not last long.  I have seen that happen with some plants that I bought.

So now I have figured out a tomato that I can grow I am going to up my game and try and grow more plants and also some of those gourmet different color types.  I am sticking with grape tomatoes though.  I do like these little tomatoes and they freeze very well too.  I cut them in half first.  Easy to throw fresh tomatoes in a salad.  The frozen ones get thrown into a frying pan for stir fries or into a stew.   Tomatoes along with an egg, Portuguese sausage and slices of cooked breadfruit all fried up in a pan is my favorite breakfast for dinner meal! 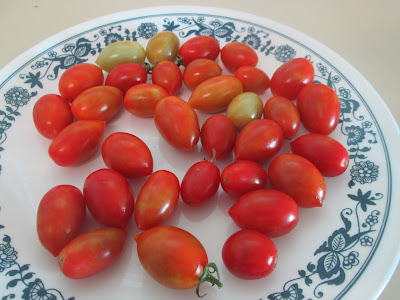 Tomatoes of course are known for their Vitamin C and Lycopene.  Tomatoes plants like rich soil and lots of sun.  I see them grown in cages or tied up on string.  Mine  is grown on dead branch props..  They like fertilizer, especially Phosphorus, at planting and flowering time.  Because my plant is in a container and long living, I fertilize my plant every month.  They need to be watered deeply but allowed to dry out between waterings.  Not getting the leaves wet while watering helps prevent disease.  I have to  pick the tomatoes after they start turning yellow or the birds and wild chickens will beat me to them.  It means getting the enjoyment of looking at a row of ripening tomatoes on the kitchen window sill.

PS  Aug, 2017
Have a look at the netting cage a friend built for her tomatoes so that she could keep the birds from eating them and she could have vine ripened fruit. 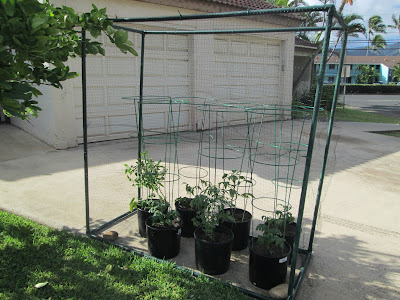 Recently noted in a nutrition book that the smaller the tomato fruit the more surface to mass it has.  Because most of the good stuff for you is in the skin of the fruit, the more nutrients you are going to get eating small tomatoes rather than a large tomato.  I knew that I liked these  grape tomatoes!

Another new thing that I am doing in growing tomatoes.  This idea came from a  guy on a Facebook gardening group that I follow.  Instead of spending a lot of time preparing seed from tomatoes you just slice the tomato in thin slices and lay the the slices on the soil.  A few days later you will have tomato plants.  When they get a bit of growth on them you decide which are the strong ones that you want and cut the others down with scissors.  Easy peasy. 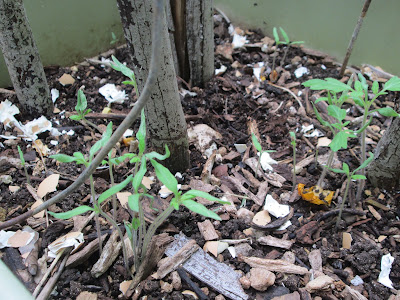 Posted by Stellamarina at 1:16 AM No comments: