Pedilanthus tithymaloides is a stiff, upright, perennial plant that is also on my loved tough plant list.  I always associate it with SE Asia after seeing it growing in pots in front of homes there so often.  In fact, it is another of those tough plants that are native to Mexico and surrounding sub-tropical areas.  That is why it can survive hot, sandy areas in your garden although it if gets lots of micro nutrients and extra water it will really put on a show for you. 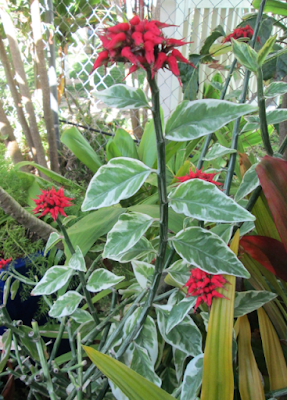 There are several subspecies of Pedilanthus tithymaloides and I have three of them in my garden.  The taller, variegated form with its green/white,pink colors is seen occasionally in Hawaii garden, especially along the coastal area where it can survive the sandy soils and salt winds.  I have seen long 2-3 ft stems included in bunches of red ginger flowers for sale.  Other forms of Pedilanthus are usually seen in containers  I think the smaller  "Nana" looks especially good in a nice pot.


If the plant is grown indoors it will not have flowers.  Outside, the Pedilanthus has small red slipper shaped flower bracts on the tips of the stems in the spring time. Hummingbirds love these flowers if you are lucky enough to have them where you live.  None here in Hawaii unfortunately.  If it is a form of Pedilanthus that gets red color in the leaves, this color will only show when the plants are kept in the sun.  If you want to see a fabulous example, have a look at the photos I took in Malaysia,  (Aug. 2012) where the red in the plants is considered to give the plant lucky attributes.  They would also tie red ribbons on the plants for the same effect.


I have never seen any seeds on my Pedilanthus plants but they are easy to propagate from cuttings.  I let the cuttings dry off for a few days to prevent rotting before planting in potting mix.   Mature plants will also send out babies from the roots that you can just pull up and plant.  Pedilanthus tithymaloides does have a white sap that is toxic in that it can cause vomiting if ingested and be painful if it gets in the eyes.  That is good to keep in mind if you have little children or pets that you are concerned about.  The sap can also cause skin irritation but I have not really had any problem from it.

Nov, 2018
A couple of photos to add after a recent trip in the South Pacific


Posted by Stellamarina at 4:51 PM No comments: