Citrus always seems to grow in our area of Oahu, Hawaii despite the sandy soils and the salty trade- winds.  I have three types of Citrus in my garden.  The two older trees, Meyer and Jambhiri/Rough lemons I have written about before,  (June, 2013) but today I want to talk about my Calamansi tree.  I have only been getting fruit from it for about three years now but I love it. 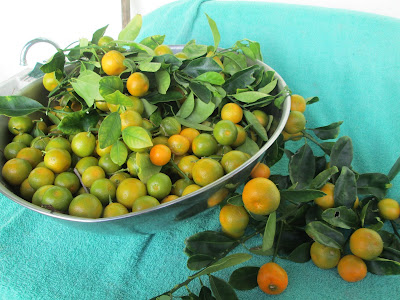 The Calamansi tree came as a free Arbor Day giveaway from Waimea Falls Park.  I guess it was seed grown because I waited several years for it to finally fruit. It grows next to the compost pile so hopefully its roots are sucking up some goodness from the compost.  I actually have another Calamansi in another part of the garden that was given to me as a gift later on and I am still waiting for that one to produce.  The fruit are a lovely small size being less that an inch in diameter.  Just right for squeezing into my ice tea or on my breakfast papaya.  I have heard them referred to as a Filipino sweet lime but to me there is not a lime taste.  I just think of it as a mini lemon although it does have its own unique taste.

This last year the tree was absolutely loaded so that I made several jars of Calamansi marmalade and also gave lots of fruit  to jam making friends.  They were making mixed fruit jam; Calamansi with strawberry or with pineapple etc. I had to admit that the jams tasted very nice, but my English heritage keeps me a purist and I just use citrus for breakfast marmalade.  Early in the fruiting season, the fruit were just turning yellow and the marmalade had a green tinge while the marmalade made at the end of the season, with very ripe orange fruit, turned into orange colored marmalade.

Calamansi juice has more of a kick to it when the fruit is just starting to ripen and is still a bit green.  I used to cut the fruit in half, just like you would for a lime, when squeezing the fruit into my tea or on my food.  Now I am smarter and I just cut a cap of skin off one end of the fruit and then squeeze.  It means much less mess and  less juice all over my hands. 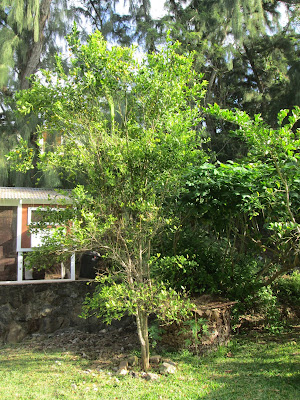 I find the Calamansi seeds quite easy to grow and they pop up after a few weeks.  I usually soak the seeds in water for a day first.  I believe you can also grow the trees from cuttings as well.  Calamansi is native and very important economically to the Philippines and used often in traditional Filipino cooking.  The tree is fairly small, growing 3-6 meters, so it is a good tree to have in home gardens. Like all Citrus, it likes being watered.  Being a citrus fruit, Calamansi is high in vitamin C and has many uses. eg.  lemonades, marinades, seasoning, marmalade etc. Calamansi lemonade is sold in cans commercially here in Hawaii. Use scissors to cut the fruit off the tree when you harvest Calamansi.  The fruit has very thin skin and it will tear if you try to just pull the fruit of the tree.  I find that the fruit will last up to a month in a bowl in the fridge while those left out on the kitchen bench will soften and go off after a week.  My tree is bare of fruit now, (it fruited December to March, after the rains arrived) but I still have some fruit in the fridge that I picked when the last of the ripe orange fruit were dropping to the ground.  Because the skin of the Calamansi is so thin the wild chickens like to eat the dropped fruit and the birds will eat the ripe ones on top of the tree.  We all get our share.

While I was at Eilat in Israel several years ago, I was intrigued by the use of shaped citrus trees on all the bedroom balconies of a white hotel building there.  They looked very elegant...the green against the white of the building plus the small gold fruit.  I wouldn't mind betting that they were using Calamansi trees.  There is a picture of it in my (June, 2013) post about gardens seen in Israel during that trip.

PS  May, 2019
My Calamansi tree sits in a neglected corner of my back yard.  It is out there in the sandy soils and salt winds that come from the beach 300 yards away or so.  It sits next to a wire cage compost bin and it and a few other plants are sheltered slightly by a big overgrown crownflower bush.  Last week, suddenly, my Calamansi was on show because the neighbors held a wedding reception in their back yard and would be sitting very near my tree. I decided it was time to spruce it up so it looked more presentable and took my loppers to cut off all the small lower dead branches that result from salt wind burning.  Then I put a few low pot plants around the bottom of the tree and in front of the compost heap.  My Calamansi looked ready for a special occasion  after that.  I was pleased to see some of my stephanotis vine ( Nov. 2013) incorporated in the wedding decorations. 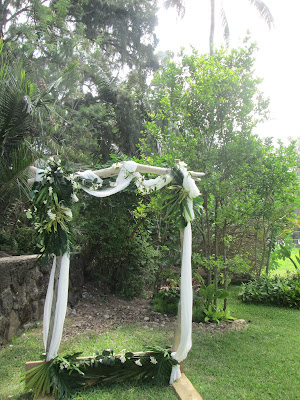 Posted by Stellamarina at 5:32 PM No comments:

You do not think gardens when you think Las Vegas but there seems to be a lot of green landscaping going on there these days.  The strip is not just hotels and casinos....a lot of palms and other greenery helps to make the area feel more like a resort.  Out in the fast growing suburbs there are a lot of trees being planted in the commercial areas and home gardens. All done with a careful eye on water usage and trying to conserve it.  I was in Las Vegas for a week recently and it was all very interesting to look at. If you get to visit this city make sure you go have a look inside the shopping area of the Venetian. Mind blowing.  The highlight of the week for me was to take a day tour out to Death Valley. So much more beautiful and interesting than I expected.  Here are a few photos taken along the main road through Vegas. 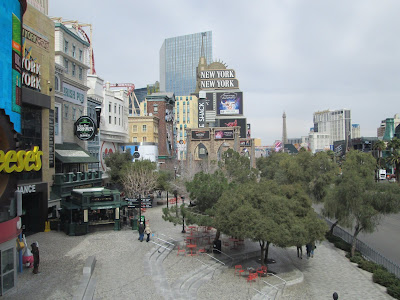 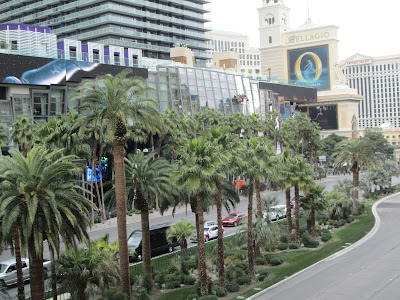 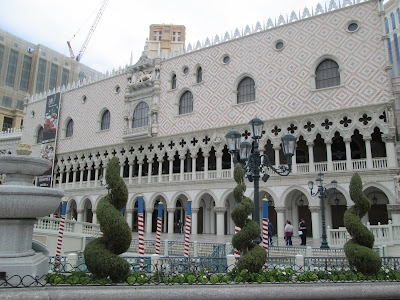 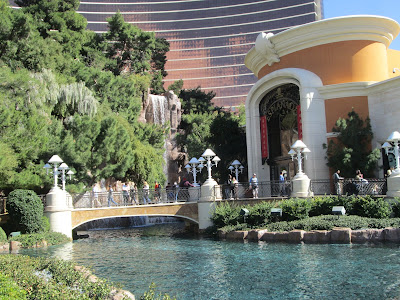 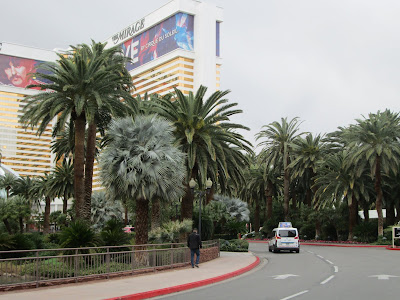 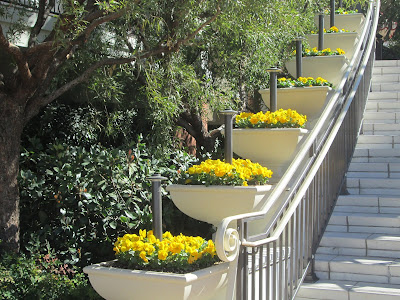 
Posted by Stellamarina at 4:50 PM No comments: