One edible plant that is easy to grow in containers is Green Onions.  Even if you just have a patio garden, this is a plant for you.  For many years I just grew Garlic Chives.  ( See my post about growing them in July 2011.)  One day I was visiting a local gentleman who had a big container of Green Onions in his garden and I asked myself why I was not growing them too.  Duh!  I have no idea why I was so slow to get around to this as they are such useful plants and some foods just seem right with Green Onions rather than using Garlic Chives as a substitute.  I mean, Garlic Chives work well with eggs and salads etc. but a bowl of  Saimin noodle soup really needs that bit of Green Onion on top and stir fried rice only seems right  with Green Onions too.  Usually when I go pick the Green Onions I just use a pair of scissors to cut the plant off about one inch from the soil and leave the roots to grow leaves again.  On a recent trip to New Zealand I noticed Green Onion being added a lot to coleslaw and that added a nice dash of bright green to the slaw.  Being part of the Allium family, the Green Onions also provide  an extra nutritional punch to the meal. 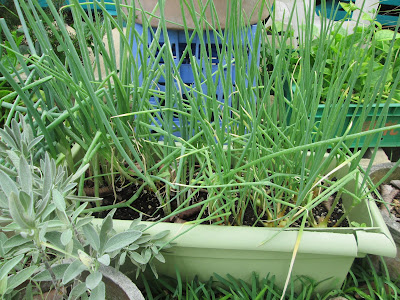 To start off your Green Onions you could buy seeds but the easiest thing is just to buy a fresh bunch of Green Onions at the supermarket produce section.  Use the upper green part, keeping about one inch of the bottom root end.  Place the bottom roots  in water for a day or so to perk them up and then plant them in your garden or a container.   In a container you could use potting mix, but really, you need some real soil in there too for the plants to grow well and also give them the occasional hand full of fertilizer.

Since writing that article I transferred the green onions to a bigger container....an old galvanized wash tub.  They have been growing there about a year or so now and the onion bulbs have been reproducing into quite a bunch with less green leaf growth.  It is time to pull up the  bunch and start off with new singles again but I will only do half of the tub at a time so that I have my green onion supply for the kitchen still going.

I seem to be having a problem with tiny round snails in the green onions.  I do not notice them when I am out hunting slugs and African snails at night time.  I found the best way to catch them is right after a shower of rain in the day time.  The tiny snails climb up the stalks of onion to get away from the moisture and are easy to see then to pick off the stalks and squash.  Otherwise they are hiding down in the soil in the day time where they do not show.


Feb, 2018
Another problem that occurred in the winter time was the onion stalks getting thin and floppy because they were not getting enough sun.  Partly this is because they get partial shade from the Curry Leaf Tree (August, 2015).  The leaves tended to flop over, especially when I shot them with the hose, and lie on the soil and that made them get even less sun.    I fixed it by laying three sticks of bamboo over the tub to give a frame to hold the Green Onion stalks so they were up and off the soil.  Only a few days later there was a remarkable difference in the  plants.  They looked so much healthier now they were getting lots of sun again

Posted by Stellamarina at 3:00 PM 2 comments:

Edible Hibiscus Leaf was the first of the alternative "spinaches" that I got interested in.  This was over forty years ago when I was living in Samoa.  There they call it Lau Pele.  It is the lazy gardeners dream plant.  Big and very nutritional leaves that you can just pick from a bush.  This is not like fussing over lettuces and cabbages.  You just stick a few feet of stalk into the ground and it will take root and produce.  Well, in Samoa and Fiji it will.  Here in Hawaii, where it is not so humid and rainy, it may take a little more care getting the cuttings going.  Usually I start the cuttings off in a gallon pot of potting mix and then transplant it out once it is well rooted.

Bele is a food plant that is grown throughout Melanesia and also somewhat in Polynesian gardens  I mostly know Tongans and Fijians in Hawaii to eat it the most.  In Samoa it was not greatly used until a decade or so ago when there was a terrible virus that hit the taro leaves and suddenly Lau Pele became the substitute green leaf.  Maybe you watched that season of "Survivor" TV show that was filmed in Vanuatu and the winner team of the week was shown by the locals how to use the Bele leaves that were growing all around their camp.  They had been starving while all this food was right there.


Bele is usually referred to as the Edible Hibiscus but it does not look like that Chinese hibiscus bush in your garden.  To me, Bele always reminds me of its cousin, the Okra bush.  With Bele, however, the emphasis is on the leaves instead of the seed pods.  The flowers look very similar, a yellow hibiscus type flower with a dark center that only lasts one day.  There is a common variety of Bele grown here in Hawaii that has large soft leaves and this turned out to be the common one in Fiji too.  I know that there are at least several varieties of  leaf shape and I decided that while I was traveling in Fiji last month for a few weeks that I would try and track down what varieties of Bele they had there.  I expected to find it all over that place in Fiji, so I must admit that I was surprised to find out that I really needed to go hunting down back alleys and farm roads to find it.

The large soft leaf variety that is the popular Bele in Fiji is used mainly in soups because it cooks up easily with fish or mutton etc.  There was another variety of Bele which had blotchy red stems which, I was told by a couple of people, needed to be cooked with coconut milk to make it more palatable  There were also a couple of other shape leaf types that I  found.  I met one Bele enthusiast in the historic town of Levuka who had four types in the garden by her house and she was kind enough to let me pick a leaf from each bush and take a photo of them together for a comparison picture.  I never saw any other varieties in Fiji beyond these four types.


Bele plants can grow to several feet in height and are usually grown from cuttings of about two feet long and about the thickness of a finger. It can be propagated by seed but the seeds may need to be nicked and soaked in water to encourage them to sprout.  Bele prefers rich soil and regular watering but does not like "wet feet".  It seemed that every time we had big rains and my garden got flooded out, my Bele would die.  The plant needs to be replaced every few years as it will get old and straggly so you need to get some new cuttings going every so often for replacement.  I used to have a fabulously beautiful red stem Bele in my garden and I am still mad at myself for not getting a new cutting going before the bush suddenly died after a rain storm flood.  It was a variety that I have not seen anywhere to get a replacement.  The plant will take full sun but it does seem to do better with a bit of afternoon shade.


Bele does not have too many disease problems but the big African snails will glide up those tall stems and gobble up the leaves if you do not keep a watch out.  The Asian beetle likes to chomp lacy holes in the leaves too but it is easy to pull off the old leaves to encourage new healthy growth.

One crop of Bele I saw in the Suva market in Fiji was just so impressive.  Such lush and beautiful leaves.  I am sure that they must have really pushed the use of water and fertilizer to get them so good looking.  Maybe even grown with some shade covering.  I was told that the Bele is quickly bought up at the markets by the local restaurants.

At home, I use Bele leaves in a stir fry or a soup.  My favorite way to use them is to add the cut up leaves to a spaghetti sauce which seems to really go well together. Some people do not like the slimy feel of the cut leaves but you do not notice it when cooked.  It has that same mucilage that Okra has.   The local Tongans will often make a chicken soup with the the Bele leaves and coconut milk which is yummy.  Bele is really high up there in nutrition with very high amounts of Vitamin A and also Iron and lots of other minerals.  It is even comparatively high in protein for a plant and is definitely one of those plants that can help to feed the starving in countries with food problems.

I enjoyed my treasure hunt for Bele while in Fiji although I was surprised that I did not find more varieties than I did.  Watch this spot because if I find other varieties to take pictures of I will post them here.  Maybe I will find others in Samoa and I still have to get a picture of the lovely red stem variety I used to have in my garden.  I have also heard of a dark black leaf variety although have never seen it.  Maybe some of you readers have other varieties in your garden.

Well....I have been off traveling for a few weeks in Vanuatu and so I have a few more pictures to add on the subject of Bele.  Let me tell your, Vanuatu is the place to see Bele growing.  Almost every home garden had it growing.  Here are a few pictures taken on the island of Nguna while I was wandering along the coastal path way.


On the same trip I also stopped again in Fiji for two weeks there.  I noticed on this trip another wonderful way of cooking Bele.  Most of the Indian restaurants there served an Indian snack food called Bhajia.  It is a kind of savory doughnut.  Flour mixed with spices and some sort of finely chopped vegetable that is deep fried.  I had some that were full of chopped Bele and onion which were very yummy.  I am sure Google can help you find recipes.