It has taken awhile for me to get around to thinking of Purslane (or Pigweed as we call it in Hawaii) as a vegetable.  I have known it was edible for many years, even that it was high in Omega 3, but I have gone on thinking of it as a survival food weed that shows up in my garden in the spring.  After seeing it being sold at the market on Corfu, in Greece, I looked at it with a little more interest and even more so after seeing it being grown in Jordan a few years ago.  The final push was when I recently saw that the local Hawaii gourmet greens grower was selling Puslane at the farmers market.  That was when the cheap me thought "Heck, I could grow it for free"

So finally Purslane has become a regular vegetable in my diet.  I toss it into salads and sandwiches and it is really nice with a bit of rice and wrapped in a piece of nori....like a roughly made sushi.  Not only is it providing cheap me a free green vegetable but it is saving me from buying Omega 3 supplements.  I also like it in a yogurt and cucumber salad while some people prefer to saute their Purslane.

Rather than harvest from the back yard lawn, I pulled up one healthy Purslane plant and potted it up to keep in my container herbs area.  It grew huge and got lots of yellow flowers that seeded into the pot.  When I pulled out the old mother plant, hundreds of little plants came up and I have decided to treat them as micro greens.  I just trim the tops of the Puslane off with scissors to harvest it for my salad. 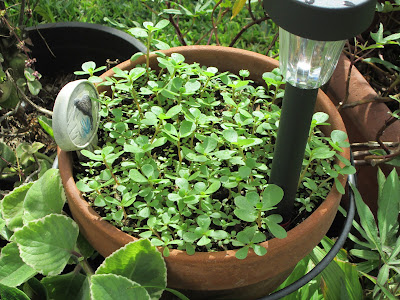 Puslane is loaded with nutrients.  It is high in vitamins A and C.  It is also has the highest amount of Omega 3 of any leafy green vegetable.  It does however, have a high amount of oxalic acid so not so good for people who get kidney stones.  The plant is originally from India but has now spread around the world.  It is a popular leafy vegetable in many countries such as Greece, Mexico, India, and throughout the Middle East. Note that these countries all have a drier climate so this is a tough plant.

In Aqaba, Jordan, the town had a community vegetable garden in a long strip of land between the town center and the beach.  I suspect that it once may have been a promenade park but has now been put to a much better use and still provides a restful green belt for the town.  The gardener/farmers were looking after small table size plots that were edged by dirt ridges and tiny irrigation ditches.  Just like irrigated fields in miniature.  Here Purslane and other vegetables were being grown.  The harvested vegetables were pushed up to the nearby town market on wheel barrows where the barrows now served as vender tables. I thought the whole system just wonderful and will add a few photos of the setup in in Jordan for you to see. 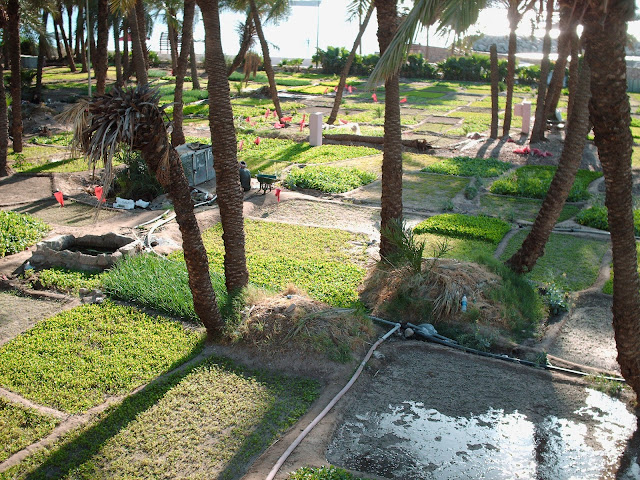 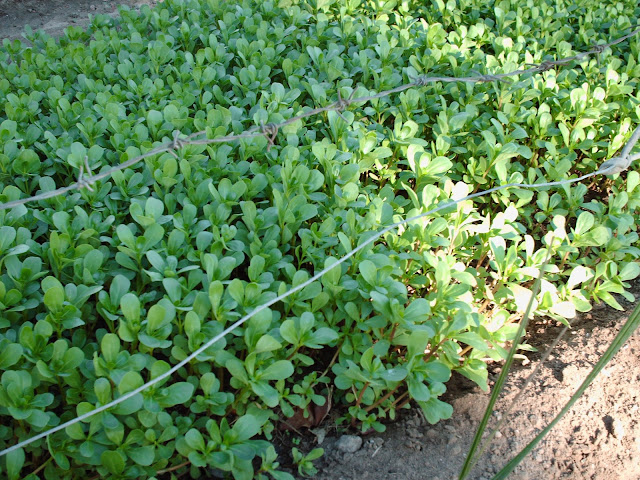 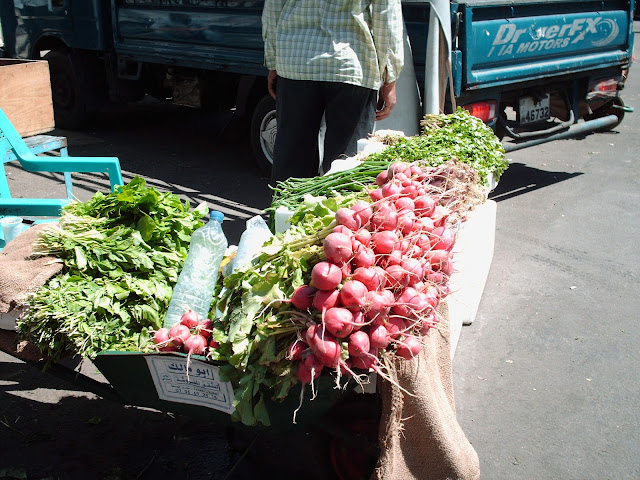 Some time has passed since I wrote this post on Purslane.  The "letting it grow and cut with scissors" has not worked out in the long run as the pot gets too crowded and the leaves get too tiny as a result so I have made some adjustments...and when I look at the Jordan pictures again....it may be similar to how they are harvesting it there too except for the thinning out.  First I need seeds, so I can gather them from wild Purslane or just grow one or two plants in the pot until they are mature and their seeds drop into the pot.  Then I let the seeds grow but when then get about half and inch high I pull most of the seedlings out and leave maybe a few dozen to grow.  In a few more days they are 3"-4" high and are ready to be harvested by just pulling them out.....roots and all. 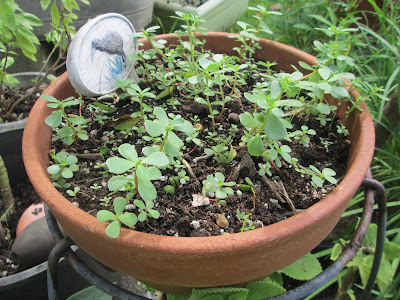 I rinse the dirt of the roots and leave the seedlings in a cup of water to keep them fresh until use later that day.  I love the leaves in egg or tuna sandwiches. Usually there are still plenty more seeds in the pot so that more will be coming up within a few days and I start the whole process again.  This just gives me small amounts from my small pot so if you wanted large amounts you might need a big tray sort of container to grow them in.  One of my beach find fish boxes would work well for that. 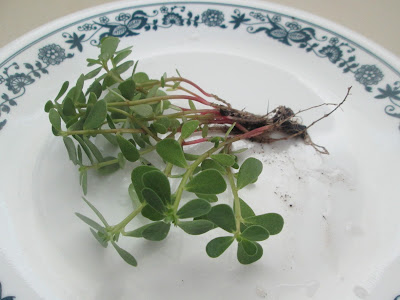 Posted by Stellamarina at 5:21 PM 4 comments: