It is just by chance that this months post on Nasturtium follows the last one on watercress. It is very interesting to note that the scientific name for watercress is nasturtium!  It is thought that the flowering Nasturtium of today's post got its name because it has a peppery taste that is very similar to that of watercress. 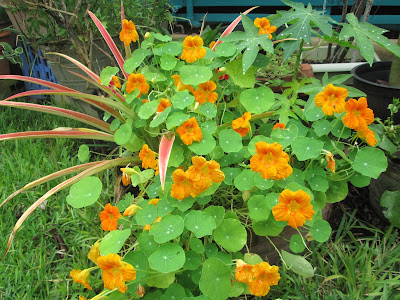 I have lovely memories of Nasturtium growing wild on sandy banks in the summer while spending  time at seaside towns in New Zealand.  A few times I have tried to grow it here in Hawaii with poor results. However my last attempt gave a big bright show of color in my garden and I was enjoying picking the leaves for salads and giving the grandchildren flowers to eat when suddenly the plant just withered on me.  It is only from advice given on a Facebook  Hawaii garden group that I now understand the root of my problems.  I had thought of the plant as a summer plant while here in Hawaii it needs to be treated like other "greens," such as lettuce, and grown in the cool months of winter. When the recent hot weather arrived my spring sown Nasturtium just gave up the ghost!  Lesson learned, and I shall look forward to having it as a regular crop in the winter now.

Nasturtium is native to South America and was introduced to Europe by the Spanish.  It is an annual that is easily grown in place from seeds.  It is another tough plant that you do not have to fuss over and will grow in marginal soils.  Its wonderful variety of flower colors, ranging from creams to orange to ruby red, make it a cheerful addition to the garden.  Although the lightly scented flowers look fragile, they will stay good in a small vase for a few days. 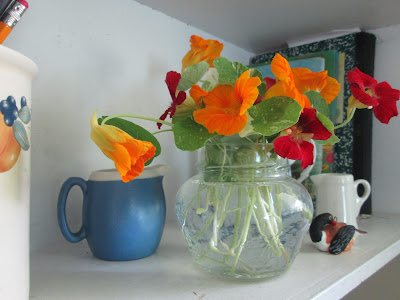 Of course the fun thing about Nasturtium is not only its good looks but that we can also eat its leaves and flowers.  The lily pad looking leaves will perk up a salad or stir fry and the flowers are the edible decoration on top.  The young seed pods can also be pickled.  Nasturtium is high in vitamin C and also in lutein which is very good for your eye health.

Thankfully, the lock downs are starting to be lifted here and in many other countries as we move on from the corona virus pandemic.  Safer still at home but I am ready to start spreading my wings after being a homebody these past few months  As I bike around my community I see many new instances of home vegetable gardening happening.  One family has almost a self sustaining farm in their front yard now.  Others have new containers or garden beds of herbs and greens next to the house or a new taro patch in the back yard.  This pandemic has given us a reminder that we need to be more self sufficient and has also given the time at home to do the work.  Sometimes we need a good nudge to make changes.

Aloha
Posted by Stellamarina at 12:05 AM No comments:

Watercress is usually associated with shallow streams and something to be foraged while out in the country.  Then here on Oahu, we have the spring fed Watercress farm that sits next to Pearl City Shopping Center which is a fascinating green space in the middle of suburbia.  I expect most of the Watercress that we see in our supermarkets come from there. 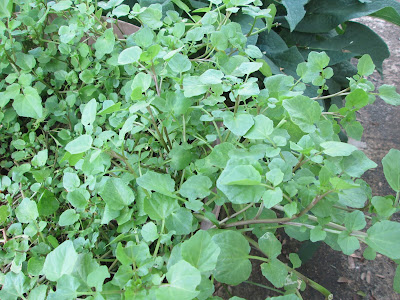 The gardening secret is that you can use that bunch of bought Watercress to get your own growing in your garden and you do not need a flowing stream to do it.  As long as the plant gets lots of water it is easily grown in garden soil or in a large container.  Pluck most of the leaves off your bought Watercress to enjoy for dinner and stand the stalks in a jar of water for a few days until roots start growing from the nodes in the stems.  Change out the water daily.  When the roots get going a few inches plant up your Watercress in soil.

I have my Watercress growing in a large shallow tub.  It could have a big saucer underneath to help retain water but so far it has not seemed to need it although the growth is noticeably better in the rainy season.  My container of Watercress gets some light shade as it is with other leafy greens kept under the curry leaf tree.  The starts came from a neighbors aquaculture tank. He had a rotating system of water from a tilapia fish tank to flush through and feed his Watercress.  My Watercress can grow quite long so that I occasionally shear it back to a few inches tall with scissors to encourage fresh new growth.  I give it some high nitrogen fertilizer every few months. The leaves go bitter after flowers form so trimming back the plant on a regular basis stops the flowering too.

Watercress is highly nutritious in vitamins and minerals so I add the peppery leaves to salads and stir fries.  Plus, in a recent AARP magazine article about lung health it said:

Something to take note of while we are all doing battle with the corona virus pandemic.
Take care and enjoy your time in the garden as we stay isolated at home.

Posted by Stellamarina at 12:50 PM No comments:

Something for the times!


Aloha
Posted by Stellamarina at 10:19 PM No comments:

Email ThisBlogThis!Share to TwitterShare to FacebookShare to Pinterest
Labels: essay on gardening., gardening in a time of crisis

For the first time, I grew Curly-leaf Parsley last winter and I was smart enough to grow it in partial shade.  Although the plant died later in the summer I was much encouraged and went to buy another small Parsley plant this winter.  However, when I got to Home Depot, all they had was the flat leafed Italian Parsley so that is what I ended up with.  It is the first time I have ever grown it, or used it in cooking, and I must say that I am a fan of it now.  The plant even seemed not to bothered by the salt wind events of the season. 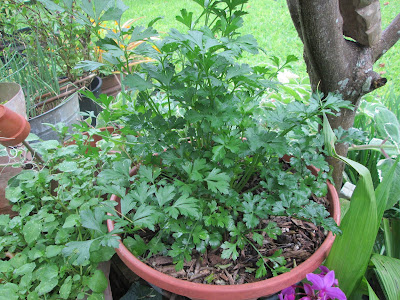 Internet sites say that Italian Parsley can be grown in full sun or partial shade but the only way I would attempt to grow it in Hawaii is to make sure it is shaded from the hot afternoon sun.  I would also only get it started in the cool months.  Parsley is meant to be a biennial or two year plant but I think is best to think of it as an annual here.  They do need a rich soil full of compost and high nitrogen.

Italian Parsley is always propagated by seed but it can take a month to get anything growing.  An easier way is to buy a small 4" pot plant and transplant it into a bigger container or into the garden. It can even do quite well in a hanging pot so works well in a patio garden.  I grow mine in a low container placed under a curry leaf tree. (Aug, 2015)  The plant gradually fattens up.  Cutting the old big leaves from the bottom encourages new leaf growth in the center and these younger leaves and stems have more flavor.

Sometime people get mixed up between Cilantro and Italian Parsley.  Cilantro has a similar looking leaf but it is smaller and more delicate with a stronger fragrance.

Of course Parsley is used a lot as a garnish but if we actually put it in our food we can get the nutritional benefits from it too.  I guess I use Italian Parsley the most in tuna and egg sandwiches but it also gets added to salads.  The stems are usually added to a "bouquet garni" when making stock and soups.

Aloha
Posted by Stellamarina at 12:21 AM 2 comments:


Recently I noticed 4" pots of Culantro for sale at Home Depot.  I was looking for a long term replacement for Cilantro.  If I buy Cilantro plants they seem to bolt into flowers and seeds within a few months. ( If I do buy Cilantro I will only buy them in winter months, only give nitrogen fertilizer, and still expect to only have them for a few months.)  Because Culantro has the same flavor as Cilantro I thought it might be a good replacement.  At least it would be fun to grow something new.


I remember seeing Culantro for the first time in Thailand several years ago.  The fact that it is now for sale in Honolulu shows that we are getting a much wider range of herbs sold locally now.  I have been having a look around the internet for information on the plant.  It looks like  Culantro can easily bolt in the summer too.....bother!  Maybe it will not be a long term replacement for cilantro.  However, if kept in partial shade and if you keep trimming off the leaves it may last up to two years.  So we will see how it goes.  This will mean notes added at the bottom of this post in the future.

I was also surprised to find out that this plant is actually native to the Caribbean islands and Mexico.  It is usually called Vietnamese Cilantro here in Hawaii so I expected it to be an Asian native.  In the wild it grows in moist, shady areas,  The one plant I bought has grown well in a 6 gallon pot and now has a few babies growing from the side.  It did grow a huge green flowering frond which I let mature to observe it.   Apparently this plant will self seed easily but it is best to cut the flowers off to keep the leaves tender and tasty.  I have found slugs nibbling at the leaves so keep an eye out for them.

One of my sons loves the Culantro leaves in his Saimin.  They are also used a lot at Pho restaurants. It is better to cut the leaves off with some scissors rather than just pulling the leaves off and risk damaging the plant.  I am still deciding if the chopped Culantro leaves work in my lunch sandwiches..  Time for a bit of experimenting.  I plan to divide some of the new babies off the  mother plant to pot up as they get bigger.

PS...after growing this plant for a few months I think I will just stay with adding the leaves to Saimin soup.  As the plant gets older the edge of the leaves grow rather sharp teeth so not so nice in a sandwich etc.   I recently divided off and potted up a baby from the first plant and sent it home with my son. Maybe I can get him hooked on growing his own food although I am happy to see him taking an interest and gathering greens from my garden.