I had vaguely heard of Arugula, (or Rocket, if you are from British background) for many years.  Something the foodies were in to.  It did not really enter my life until ten years ago when I spent several weeks traveling around Italy.  As usual, I was traveling on a low budget and staying at hostels etc.  I was always on the lookout for cheap eats and various deli/bakery type places sold sandwiches I could eat on the street or sitting on a park bench.  It seemed that a savory filled sandwich like cheese or ham would always have several Arugula leaves added in such a way that half the leaf hung out from the bread and then when they wrapped the sandwich in plastic film the leaves wrapped over the bread and made it look more attractive and healthy.  I was rather intrigued by this and like to do it at home now.  I got used to the peppery taste of Arugula on that trip and started growing small batches of Arugula in my container kitchen garden when I got home. 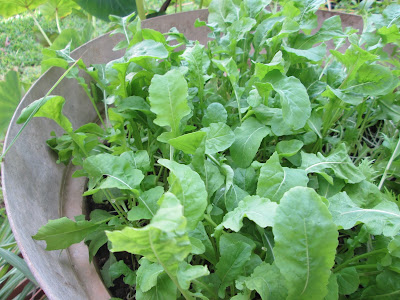 At first I was not sure how well Arugula would grow here in Hawaii, but after several years experience I can assure you that it does well here.  I do start growing it in the cooler months and into the summer until really hot weather overpowers it.  I grow it from seed.  Just a small teaspoon of seed scattered over the soil in the wide container and patted down into the soil.  This last time I used seed from a partially used packet that had been in my fridge for five years.  I was not sure if it would be still viable but up it sprouted in a few days time.   When the plants come up I start using them as micro greens but soon I have a good supply of leaves several inches long.  I use it along with Mizuna leaves (July, 2016)  in sandwiches and adding to green salads.

Arugula has been popular since the days of the ancient Greek and Roman empires.  It is an annual and a member of the mustard family.  It loves rich, moist but well drained soil.  It likes sun but tolerates some shade, especially when it gives some protection from hot afternoon sun.  I saw a suggestion on the internet that Arugula would make good ground cover, especially under a tall plant in a container.  I could really see this working in a patio garden for apartment dwellers.  The plant does tend to bolt into seed when the weather gets hot.  Apparently it is an easy plant to gather the seed from so I need to keep a few old plants going this year to get the dry brown pods and try to do that.  Free seed is good.

Aloha
Posted by Stellamarina at 11:00 PM No comments: