Mock Orange is a small tree that gets ignored by visitors to Hawaii as it is rather plain with small green leaves.  Add that is is usually used in hedges and it really falls below the tourist radar.  It is only when it is in flower for a few weeks in the fall that it gets noticed.  Then there is a strong fragrance wafting in the air as you walk or drive down the road and you turn your head to see where the perfume is coming from.  The small leaves of the Mock Orange are also popular with lei makers in Hawaii as the long lasting leaves are often threaded between flowers for some green contrast color in a lei.  It really goes well with the flowers of my crown flower tree.  I have one Mock Orange tree tucked up into a mixed shrub hedge that keeps me supplied for lei making.  The small Mock Orange flowers are beautiful but do not last well for flower arrangements and some find the fragrance too strong in the house.  You might not want to plant a Mock Orange too close to a house window for the same reason. 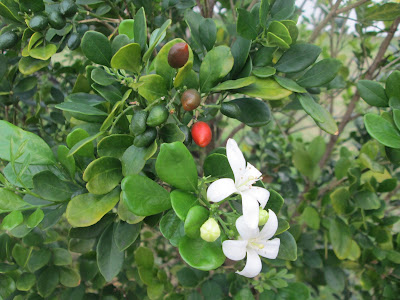 Mostly Mock Orange is used in Hawaii for forming hedges along the road front and can grow thick and high.  They are easily trimmed and shaped. Sometimes they get used for topiary. There are quite a few Mock Orange hedges in my community.  Several months ago, one very tall and wide hedge got a very severe cut back so that it was mainly bare sticks remaining.  I wondered whether the hedge would be able to recover.  I had a look at it a few days ago and took the picture below.  As you can see, it is coming back strong and in several more months should be really thick again.  Tough trees!

Inserting another photo in here a year later so you can see how the hedge above looked a year later.  I was very impressed with how tolerant the trees were to the hard pruning and how fabulous it looks now.

There is another smaller and lower Mock Orange hedge in town that I walk by on a regular basis.  This one has some problems and one of them is the salt winds that come down the street. 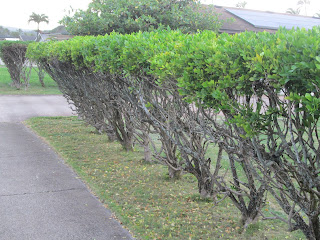 However, the main problem is the way the hedge has been cut over the years.  It has developed what is called "helmet hedge".  Bare branches inside and a covering of leaves on top.  This is because the sun is not getting into the plant because the hedge is cut in such a way that the top is the widest part of the tree and it shades the rest of the plant.  This can happen with any type of hedge.....not just Mock Orange.  Hedges need to be shaped so that the top is the narrowest part of the plant and the sunlight can get into the plant for good leaf growth.  Actually, every time I walk past this hedge, I want to get my loppers out and chop it down a few feet so that it will get new growth like the other hedge above.

If you are from the mainland USA you may be thinking that these pictures do not look like the Mock Orange you know.  That is because another plant is called Mock Orange on the mainland.  A good example of why we also need the scientific names for plants.

Mock Orange is a native to SE Asia and up into SE India area.  It can grow up to 25 ft tall and likes sun but will take partial shade.  It likes well drained soil but is also happier if watered during dry weather.  Mock Orange can be easily grown from cuttings but I have only grown if from the seeds in the small red/orange fruit.  I guess it is because I like playing around with different fruit seeds to see if I can get them to grow. 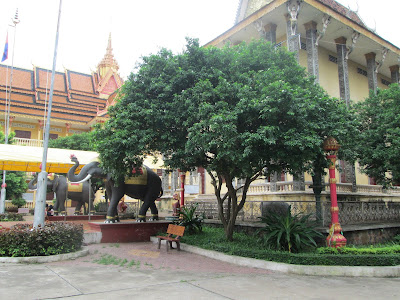 The main reason that I decided to write about Mock Orange this month is because of this beautiful tree I saw in a Buddhist  temple garden in Cambodia last month. As I have already said, here in Hawaii Mock Orange trees are usually just seen in hedges.  The tree I saw in Cambodia was a beautiful naturally shaped specimen of a tree that really impressed me.Why are we not using these trees more in our garden?  They are not too big.  Trim the lower branches a bit to lift the crown so you can sit under the tree in the shade. They would make a real gem to to have in the garden.  How come we are just using them for hedges?