This is just going to be a quick post today but I am excited to introduce a new plant in my garden.  For the first time ever, I saw Portuguese Cabbage starts at Koolau Farmer's nursery about a month ago.  I only heard about this cabbage for the first time a few years ago.  It was an important vegetable in gardens of Portuguese workers on the sugar plantations here in Hawaii. They called it Couves.  I am thrilled to actually see what it looks like and to have a go at growing it.  After only a month of growing this single plant I am already a fan so this is why I wanted to write about it today.   Have a look at the picture.  It is a very sturdy plant and a no fuss one.  There has been a bit of leaf miner in the old leaves but I just remove them.  The plant is very similar to collard greens and apparently grows the same way......the stem just getting taller and will keep going all year long.  I have already had a few leaves in a stir fry and I look forward to just picking leaves off as needed and having a constant supply.  This is a picture of a young plant and hopefully I will be able to put up some pictures of the mature plant later on.  You can check back for later reports. 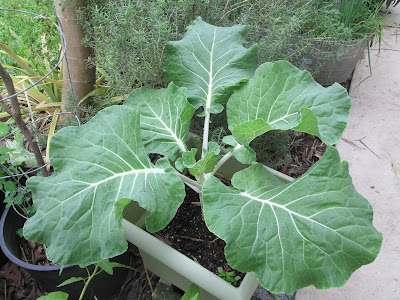 In Portugal it is an important vegetable used in national dishes.  It will work good in your Portuguese bean soup or in a stir fry or coleslaw.  It can be grown from seed but apparently you can cut the head of the stalk off , remove most of the leaves and plant that up too.  I expect the stalk then grows a few more heads....just like collard greens.  Anyways, I did want to share my excitement about this plant and maybe it is something new for you to try as well.

PS
A month and a half latter and the plant is still surviving.  The leaf miner has not been bothering lately but those tiny round snails have to be watched for.  I also get a few white fly hanging around under the leaves so I have a habit of tapping the leaves underneath as I walk by to make things too uncomfortable for them.  One leaf is a serving for one person.  I love it in a coleslaw with grated carrot and green onion.

July 2017
Well my Portuguese Cabbage is still alive  after five months and I am still enjoying a few leaves from it every week.  It is now a head  of leaves on a stalk.  The white cabbage butterfly have become interested in it so I keep it covered with a bit of netting made from the net bag I bought some avocados in.  It does seem to discourage the butterflies but it may just be that they are now more attracted to my neighbors cabbages. 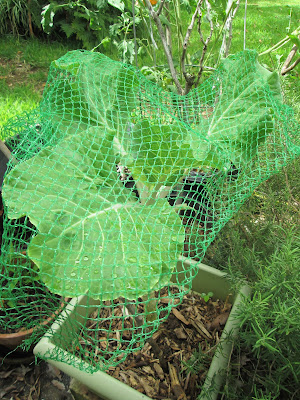 July 2018
Well, the cabbage is still alive but seems to get lots of aphids attacking it.....I try to remember to shoot the leaves with the hose when I am watering to make it less attractive to them.  The stalk has become at least 4 ft tall now and is leaning over a bit so that I have propped it up a bit so that the plant does not pull out of the ground.  Now I have a new development.....a few baby cabbage heads growing out of the stalk.  Maybe I could chop the top off and let it become a multi headed plant, or maybe I can cut these mini heads off and grow new plants from them.....I think I will try that first.  Maybe that is how the grower got my original plant growing  rather than by seed which is what I would have expected. 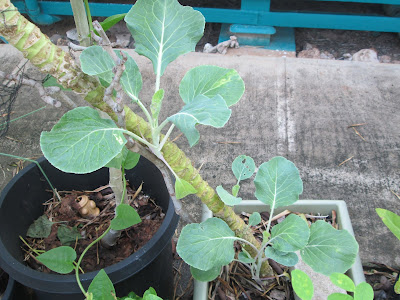 Nov. 2018
Well, I made a bad move....the cabbage plant was getting so tall and leaning over so much that I decided to cut the top two thirds off before I went on a trip.  Came back a month latter to find it dead.  Not sure if it died because of stress or because of so much rain that got in the stem and made it rot.  Maybe next time I should put a tin can over the stump like they suggest when cutting papaya trees so that rain does not get into the trunk.  I did get a few of the babies going that I cut off and planted up.
Posted by Stellamarina at 11:26 PM No comments: