After a rainy summer the Spider Lilies are in full bloom in our community.  We have a lot of them in private and public gardens as well as fronting homes along the road sides.  It is a plant that easily takes our sandy soils and salt winds.  In fact, it is one of the few plants used on beach front properties that will survive the conditions there. 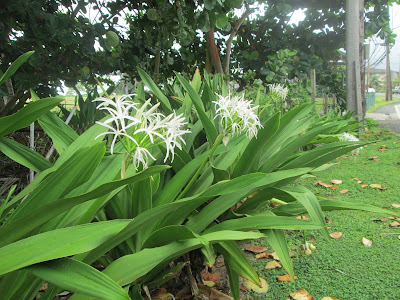 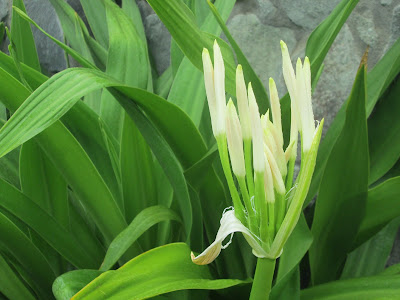 You will notice that I have given two scientific names for the Spider Lily.  Crinum asiaticum and Crinum augustim. ( Note that what we call Spider Lily in Hawaii is not the same plant they call Spider Lily on the mainland US.)  Where one starts and ends for each of the Hawaii species seems to be me to be to a little difficult to decide on.  Ausgustim we will say is bigger and has more purple/pink in its leaves and flowers, but there does seem to be a moving dividing line between them.  To make if more difficult, people in Hawaii will refer to the "Queen Emma Spider Lily" but again, it is hard to pin down exactly which form they are referring to although it is on the agustim end of the scale.  Occasionally you see a very large spider lily with super large pink edged flowers.  Is that it?  One of my memorable "National Geographic moments" was to watch a large sphinx moth slurping up nectar from a Spider Lily flower one evening.  Its "tongue" must have uncurled out about 8" at least. 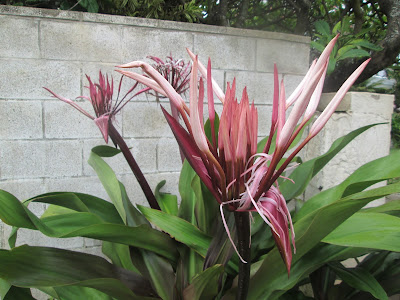 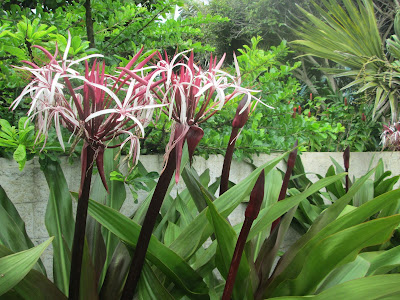 On the Crinum asiaticum end of the scale you will find shorter, 3-4 ft high, plants with green leaves and smaller but strong white flowers.  I like them for the firm fragrant flowers that can be tucked in your hair or behind your ear.  ( You might want to pull off the little pollen loaded parts of the flower when you do that.)  They also do well in flower arrangements.  The actual flower will last the day but in a flower arrangement you use the whole head of flowers, removing the floppy dead flowers each morning to be replaced by new opening buds.  For my son's wedding years ago, we used these big  flower heads on low table flower arrangements The flower head was tucked in with sturdy green and yellow foliage and lots of trailing greenery.  They looked lovely on the round, white lace cloth covered, tables that were scattered around the lawn and they were all done for free beyond buying a few blocks of oasis.  With the bigger augustim flowers you will find some that are firm and beautiful while others are very floppy and look worse as they die off.  It is good to check out the parent flowers of any plant before you take babies from them. 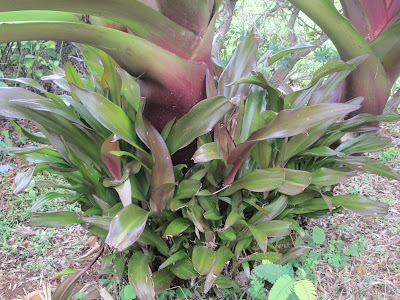 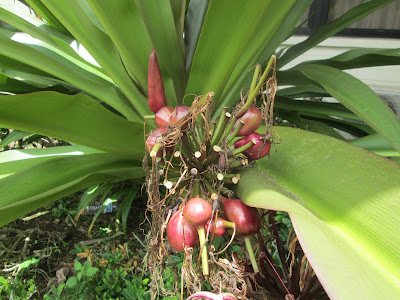 While the purple leaved Spider Lilies will have dark purple fruit, the green leaf types tend to have rounder, green fruit but there are some that will have a redish fruit.  If gardeners and grounds crews are quick to cut off the unattractive dead flower stalks you will not see much fruit.  If you want fruit for propagation, or to add interest to a flower arrangement, you will have to put up with some dead flower heads for a while. 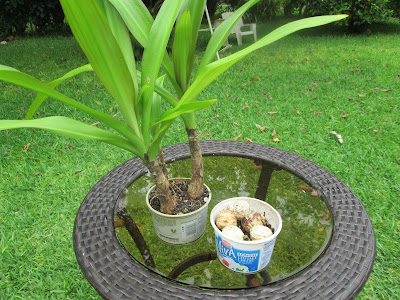 To propagate Spider Lilies it is easy to grow new plants from the fruit.  The whole fruit is filled with one or two bulb like large seeds.  Just lay the fruit, with skin removed or not, on some soil or potting mix and they grow.  It is also easy to divide a baby plant off that is growing up around the main stalk.  Just make sure that you are getting a few roots attached to the baby stalk as well, as you cut  the baby away with a knife.  Cut deep into the soil and do not pull too hard or you will have no roots on the baby plant and it probably will rot out and die.  A few years ago, I wrote a blog post about the Golden or yellow leafed Spider Lily. (Aug. 2014)  I have never seen them fruit so these plants are always propagated by division.

After you get the Spider Lily growing out in the garden you will have to decide how you want it to look.  Do you want it clumping?  Then allow the babies, or at least some of them, to grow up as well.  If the original plant grows too high and big for your liking you can easily cut it off at the ground and let a few of the babies grow up.  If you want just one single plant then the babies sprouting at the base need to be kept trimmed down.  After a few decades an old Spider Plant may not look so attractive and the decision can be made to replace it with a younger plant.

As far as maintenance, Spider Lilies are an easy plant to grow.  A bit of extra water and fertilizer will make it look even nicer.  The old dead leaves and flower stalks need to be occasionally removed. The plant likes sun or semi shade.  The purple leaf varieties show their color more in the full sun.  I have put up some photos of various Spider Lilies around the community for you to look at.

PS      Well, only a few weeks after writing this post, I was out walking this morning and spied a Spider Lily with the large flowers so went back later and got the photo below.  As you can see, it is a real beauty.   The individual petals are at least 7" long and 3/4" wide.  Notice the leaves of this pink edged lily are green.  So is this Crinum asiaticum or augustim?  I have no idea.  Is this plant the "Queen Emma"?  Again, I am very unsure.  Maybe one of you readers can help on this. 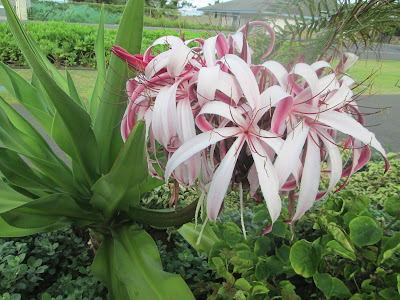 Ha.....only just a few days after putting up that photo.....guess what I saw while at Waimea Valley botanical park today?    It was this very same plant and the plant sign said "Queen Emma Lily" and also "Crinum augustim".  So we will go with that.  It is thought to be a plant that originated from Calcutta horticulture work and was growing here in Hawaii in the garden of the Hawaiian Queen Emma in the 1800s.   I am glad to pin the plant ID down.

April 2018
Well, I thought I had the Queen Emma Lily question answered but a few weeks ago I was at Fosters Botanical Garden in Honolulu and they had a sign that said Queen Emma Lily next to a Spider Lily that looked like the  thinner pink flower one up near the top of this post......so..... I guess  any Crinum Augustim can be called Queen Emma Lily and just accept that there is some variety in flowers.  I think I would rather just use the name for the beautiful big flower type though.
Posted by Stellamarina at 6:20 PM 5 comments: