Golden Eldorado, which often is just referred to by its scientific name, is a common shrub through out the Pacific islands.  In my mind it it always associated with Samoa where the children usually have Golden Eldorado flowers included in their small bouquets that they carry to school to decorate their classrooms.  The shrub is probably native to the Melanesian islands of the western Pacific but it is such an easy and attractive shrub that it has now been taken up by the tropical zones around the world. 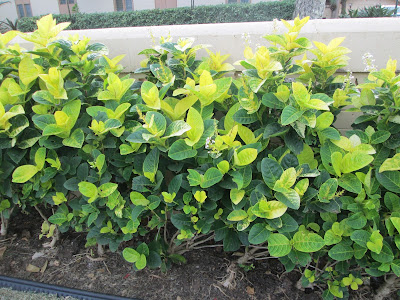 The Golden Eldorado is very popular for hedges.  Although it can grow up to 10 ft. or so, it is an easy shrub to prune and shape and will even tolerate a very hard prune.  Actually, if left untrimmed, the center of the bush gets rather woody so a good trim promotes new growth and a more leafy appearance.  It likes the sun but will also grow in partial shade, although the leaves will stay more greener than the bright yellows that show up on the new growth in the sun.  Golden Eldorado is also a good shrub for growing in beach side towns as it can handle sandy soils and ocean breezes, although I would not be planting it right on the beach edge.  The spikes of small white flowers with a purple center are attractive and nice to add to a small jar of flowers in the house.  Although it is a tough plant it will look happier with occasional fertilizer and extra water. Remember that it comes from humid, rainy islands.

Propagation is usually done from cuttings.  In fact if you are new at plant propagating this is a good shrub to start out on for cuttings as they have a very high chance of rooting for you.  Take cuttings from the upper stems that are no longer soft and floppy.  Stems that are about the thickness and length of a pencil work well.  Always make the cutting about half an inch under the node or joint as this is where the new roots will grow from.  The cuttings will easily grow in some loose potting mix and can be transferred out into the garden within a few months.  The slugs rather like the new shoots on the cuttings so be on guard for them.