NEW CHAIRS IN THE GARDEN

Things are looking up this week.  I have new chairs in my garden and it is amazing the difference they make to the feel of the place.  My old plastic chairs were a few years old and, although still usable, looked very faded and drab with lots of mildew on them.  I had been saving up a few dollars from plant sales while I was on the lookout for some new chairs on sale. (In my retirement the garden has to pay for itself.)  Last week some lovely, sturdy plastic chairs went on sale at Longs Drugs for $9 each and I bought eight of them. The chairs are made in Italy which I think says something about our global economy.  The old chairs I put out by the road and  were gone in ten minutes.  I do not expect these new chairs to last more than a few years.  Between sun, rain, and salt air any chairs I have had in the garden only last three or so years at the most.  I have tried wood, plastic and metal in the past.  Some super expensive ones might work but it seems easier to just go cheap every few years. 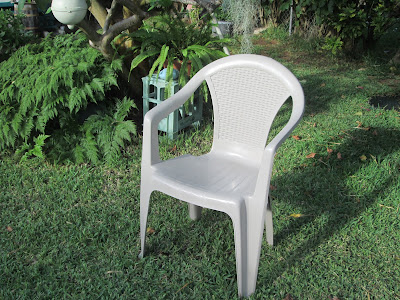 Meanwhile, son #2 had also noticed that I needed some new chairs.  He suddenly showed up with four new wood Adirondack chairs that he had assembled and painted.  What a lovely colorful gift that really gives a lift to the garden....and to me!  The paint job is even more impressive when you know that it was done with leftover paint found abandoned next to a trash can. 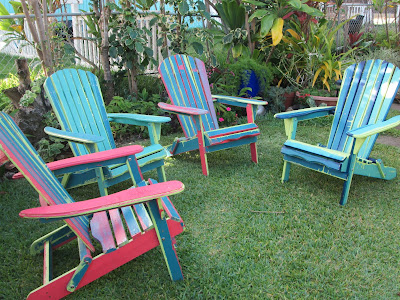 So, sorry there is no plant info today, but this post is really just to show off my new chairs.  The four Adirondack chairs will go in a shady spot near the kitchen door where we like to sit and talk in the cool of the evening. I will place one of the plastic chairs under the guava tree which is a good shady spot in the morning to sit and have a cup of coffee.  The rest of the plastic chairs will be kept stacked by the house to quickly  come out when we have a gathering for a BBQ or a birthday etc.  I do love being able to provide a nice garden area for my kids and grand kids to build memories in.

Aloha
Posted by Stellamarina at 2:11 AM No comments:

Ground orchids showed up in Hawaii a few decades ago but it is only now that I am starting to appreciate them.  In the past I tended to keep my garden green with "useful plants" only.  That meant very few flowers and then they would be shrubs with flowers like Crown Flower where I used the flowers for lei making. (Nov, 2011)  I must be getting softer as I am wanting more flowers in my garden these days.  Just for decoration.....to give me delight. 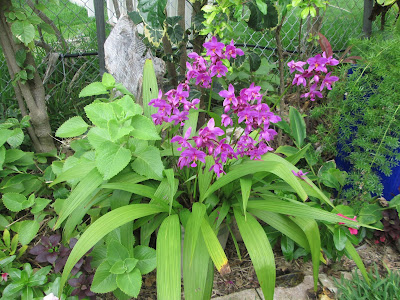 Several years ago I found a pot of half dead Ground Orchids in the trash can at our local cemetery.  After reviving  and re-potting them I gave them to my daughter to put by her front door.  A few years ago she gave them back to me as they were going to be living off island for a while.  She is back now, but I have kept them near my front door and fallen in love with them.  A few months ago I divided up the clump into three and re-potted them in large 3 gallon size cement pots.  Fabulous!  They loved the new soil and root space and have been putting on a show for me since. 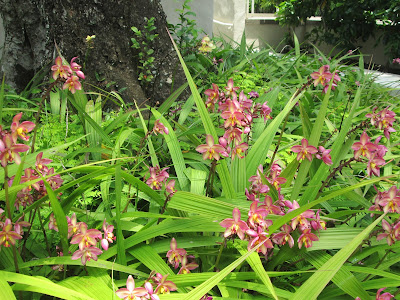 Most orchids grown locally prefer less soil and lots of air space around the roots.  This is why these Ground Orchids are different.  They are terrestrial orchids as opposed to those that like living on tree branches.  They love soil, as the results of my re-potting showed.  Ground Orchids do like some shade, especially to protect them from the hot afternoon sun.  They look great as ground cover under trees.  The Ground Orchid likes moist soil but do not like wet feet so those grown in containers need to be allowed to dry out between watering.  The leaves look rather like baby palm leaves,  Sometimes you will need to trim off some brown leaf tips with scissors to keep the plant looking attractive. 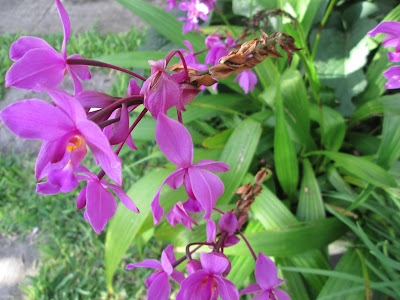 I have seen two color varieties of Ground Orchids.  There is a yellow/mauve flower variety and the dark purple variety which is the more common and the one that I have.  Flowering occurs on 1-2 ft long stems during the warm months.  It is recommended that your fertilize in spring and summer with a controlled release fertilizer to keep the flowering constant.  The tiny flowers come out at the top of the spike while older flower heads will have dead brown sepals on the stem left from older flowers that have died off.  When the flower head is new and young it looks very attractive in flower arrangements and will last up to a week in a vase.  I do not see it sold in the flower shops here in Hawaii but it is popular in the market in Samoa.  To dead head the Ground Orchid you cut off the complete dead slower spike.