Rosemary is an easy grown herb in my Hawaii garden.  It loves warm weather and sandy soil.  Actually the Latin name for it tells all.  Dah!  How come I never noticed the word "marinus" in the name before.  It is native to Mediterranean coasts and so that is why it happily grows in the alkaline coral sands of my garden.  It even grows in the worst corner of the garden where the soil was just coral rubble. 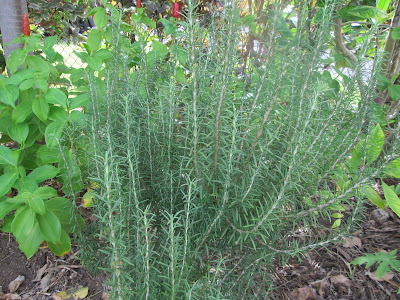 I first grew Rosemary in a container just to have it as part of my collection of herbs.  After seeing how tough the plant was I tested to see if it could handle my coral rubble garden corner.  Now I admire the plant even more for its tenacity along with the yellow flowered Lantana and the Aloe Vera that will flourish  there.  Every time I rake fallen leaves off the lawn I dump them in this garden to try and build up the organic matter there and the soil is gradually improving although very sandy.  Horse manure, composted wood chips and old Comfrey leaves also get thrown in.  I can understand why I sometimes see Rosemary planted in road medians in hot dry countries.

Over many centuries of Western history Rosemary has also become a symbol for fidelity and remembrance so that it sometimes gets used as part of weddings and funerals.  It was thought provoking to see Rosemary planted in the cemeteries  of WWI ANZAC soldiers who died at the Battle of Gallipoli in Turkey.

There are claims for medicinal use of Rosemary but I suspect you need it in high concentration to work.  Hopefully the small amounts of good we get in adding this herb to our cooking is all to our health too.  When you pick Rosemary fresh it has a rather strong pine fragrance but this softens out in cooking.  It has been long associated with roasted lamb and potatoes but is also good in breads, soups, casseroles and with other roasted meats like chicken and pork.  It is a popular garnish as well although I suspect that you are going to be paying extra for that steak when it has a spear of Rosemary sticking out of it at a fancy restaurant.

Rosemary usually has lots of small blue flowers in springtime.  When I travel to New Zealand I see Rosemary in gardens there just covered in flowers but I have next to nothing on my plants.  I am not sure if it is because I live in the tropics or because I keep them trimmed down. 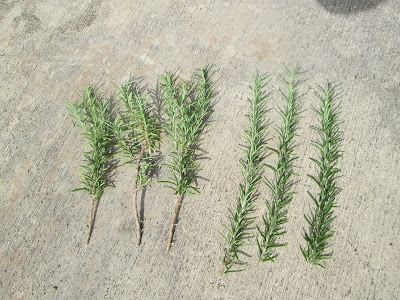 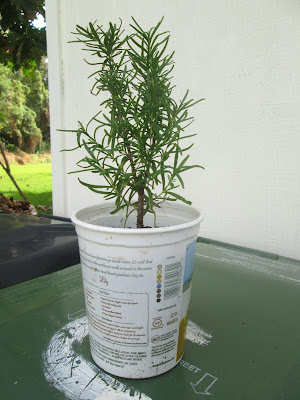 If I want to propagate some new Rosemary plants from cuttings I will first pinch the tips off all the young vertical stems on the mother plant.  Months later, when the the vertical stems now have branched out, I cut the stems off, remove leaves from the bottom few inches, and plant them up in a pot.  Usually I give the cuttings a few hours to perk up in water first and a dip in rooting hormone before planting as they are not easy growers and my sucess rate with Rosemary is not fantastic.  At least a few will root and live out of about a dozen cutting.  The new branching growth from the pinching of the tips gives the new baby plant a nice tree shaped growth.

PS   Feb. 20017.
Recently read about a study that found that even just sniffing the scent of Rosemary can help your memory.  mmmm.   Well, if a free sniff of my Rosemary bush will help my aging little grey cells, I guess I can do that on my morning inspection walk around the garden.

Posted by Stellamarina at 1:10 PM No comments: