The white striped Agave Americana is so large and dramatic that you will not find it in my garden. You find them in public gardens of our town and I have had some experience in the past growing them. The wild native Agave Americana is bluish in color and from Mexico.  It is famous for the tequila that is made from the cooked plant hearts.  This large white striped form of the Agave is of horticulture origin and it is the Agave you see most in Hawaii landscapes.  It gives a large strong contrast against the tropical greens.  The white striped Agave grows 3-4 feet tall with large stiff leaves that grow out in a rosette formation.  Those leaves have a very sharp tip that really hurt if you get poked with them so you need to keep the plant away from pathways. The plant is tough and is able to take hot sun, dry conditions, poor soil and also our salty trade winds. 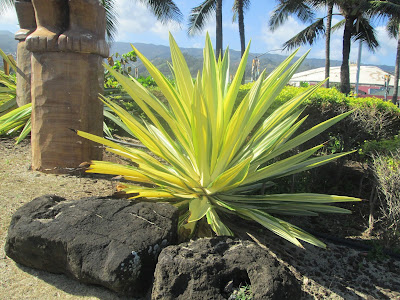 One of the names that this plant gets called is Century Plant.  It seemed like a century before this plant flowered and then died.  In actuality it does not take that long to get around to flowering but it might take 20-30 years before the flower stalk appears and at least 10 years.You are going to need some room for the flower as it shoots up as tall as a flagpole and then will be covered with thousands of flowers in clumps. 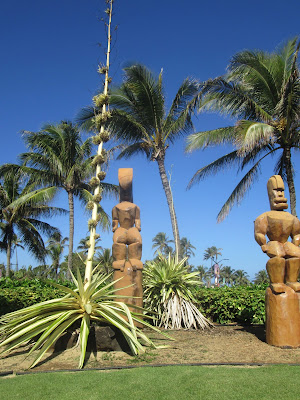 After the Agave Americana flowers the plant dies off.  It does not look so impressive now so the gardener needs to come and remove the old plant and put another in to replace it.  However, if you take your time in removing the plant you may get several baby plants growing out of the old plant base which you can detach with a knife and pot up for future use. 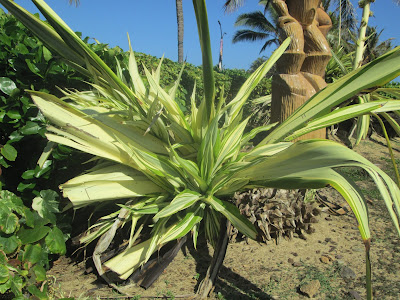 Other times you might find baby plants growing up nearby from stolons....rather like the Sansaveria produces.  Another way you can get lots of baby plants going is just pick up those stiff little flowers that drop down from the "flag pole" and pot them up in 4" pots to get started.  This is an easy way to get some baby plants if you are a "stealth gleaner" of seeds or cuttings.  Nobody is going to miss a few of those flowers dropped on the ground at the public park.  Of course as they grow bigger you will need to transplant them into bigger pots but the plant does better if grown in smaller size pots so that the soil dries out between watering. 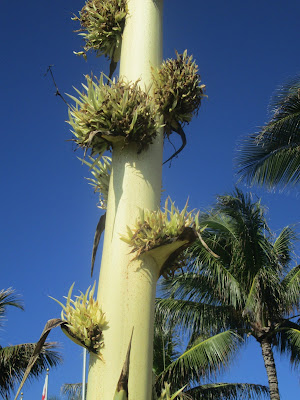 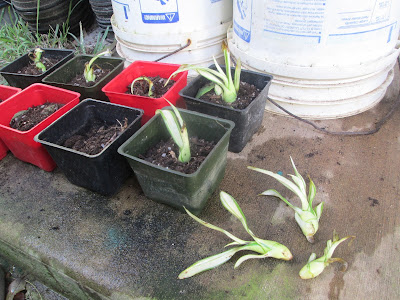 I would not bother to fertilize an Agave Americana out in the landscape and only water it to get it established. The one job in taking care of this plant is to trim away the old dying leaves at the base of the plant to keep it looking its best.  This is easier said than done with all those sharp spikes ready to get you.  Good strong gloves and a sharp curved knife with a very long reach is needed.  Some eye protection might be a good idea too.

The photos above were taken a few weeks ago.  Lucky that I snapped them then as the grounds crew decided it was time to remove the old Agaves that had already flowered and they are now gone.