For several years, the only Vinca flowers I knew were the common pink ones that grew year round in Samoa.  It is a tough plant that self seeds so I would find baby plants that could be transferred around the garden.  The plants would get a bit leggy but picking flowers for a posy indoors helped to keep the plant trimmed back.  When we first moved to Hawaii I noticed the same Vinca showing off its resilience in the unirrigated and sandy soil of the local graveyard.  I always like tough plants that will carry on without people constantly fussing over them.  The plants you see still growing in neglected gardens are the ones to choose for your home garden.


Today I have several Vinca in my garden to add some color.  It shows that I am going soft in my old age because for a long time I just wanted useful plants.  Now I am appreciating having a "prettier" garden with splashes of colorful flowers.  The older pink type has been replaced by modern Vinca varieties bought from Home Depot which come in a wide range of colors from white, pink, red to lavender.  I notice that Home Depot in Honolulu seems to be only selling potted flowers in 6" pots now and not in the 4" starter pots.  I'm sure the growers make more money this way, but it does make for a stronger plant with a bigger root system.  I expect it means less stressed plants at the store during hot summer months too when store attendants get behind on their watering schedule.  Just lately there is a new Vinca cousin that has been showing up at Home Depot.  It sells under the the name of Catharanthus but it is a Vinca with an extra ruffle of petals coming out of the center which looks promising. 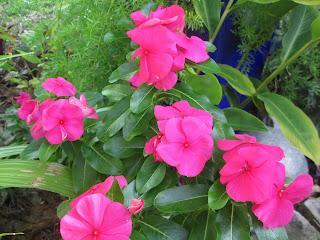 Vinca is a tropical plant.  It needs temperatures above 70 degrees to keep on flowering.  On the mainland US it is referred to as an annual but here it grows for longer periods.  There is also a creeping Vinca grown on the mainland but I have not seen it here.  Vinca likes full sun to partial shade.  It prefers acid soils but it does fine in our sandy soils.  It does need good drainage.  It can get root rot and branch blight, especially in the rainy season so it should not be over watered and it is recommended to water the soil rather than the leaves to help prevent branch die back because of blight.  Vinca is actually a medical hero plant because the chemo drug Vincristine is extracted from the plant to treat leukemia in children. 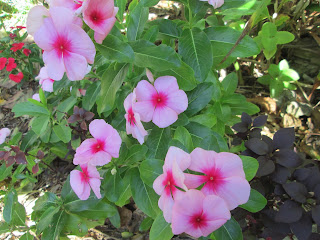 Vinca flowers on older plants produce little slender pods of seed which I have grown a few plants from in the past but I have only had success with wilder pink variety.  It takes careful timing to get the seeds as you need to gather the pods when they are starting to turn yellow but before they burst open.  You can pick the pods and put them in a paper bag to finish drying off and collect the seeds from the opened pods.  The plants can get a little tall and leggy but a bit of trimming back makes for a more attractive plant.  A bit of fertilizer  a few times a year will give them a boost too.

Posted by Stellamarina at 3:53 PM 2 comments: