I realized that I needed to grow a Tiare bush (also known as Tahitian Gardenia) in my garden when my daughter was needing Tiare flowers to put in her hair on her wedding day.  We ended up finding them in a Tahitian friend's garden.

I knew, from earlier experience, that getting Tiare plants growing from cuttings is very hit and miss.  Maybe only one in twenty cuttings would grow roots for me.  I also knew of a Tiare bush that had big golf ball sized, seed filled, fruit on it, so thought I would have a go at growing Tiare from seed.  I gathered a couple of yellowish colored fruits and left them for a few weeks on the windowsill to ripen up to a squishy orange.  There are many seeds in the fruit and so I got a whole tray full of seedlings from the experiment.  As I transplanted them and re potted them, I found them to be quite hardy and forgiving of lack of care when I was away.  I planted one of the babies in my garden where it is now a very healthy bush supplying me with lots of flowers despite being in a place where it gets our salt winds.  It does get well watered though from the down pipe run off from the neighbor's roof. 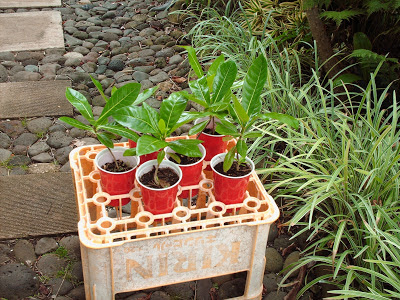 The Tiare bush can grow as high as 12 feet high but most people keep them trimmed down lower for easy flower picking.  They have wonderful large glossy green leaves that show off the pure white flowers.  Leaves do tend to turn yellow and drop off if they do not get enough water though.  The flowers are very fragrant.  In Tahiti, where it is the national flower, the flowers are used to perfume coconut oil to make body oils.  The flowers look so beautiful tucked up in a woman's hair or strung into a lei.  All the hotel resorts in French Polynesia greet their guests with Tiare leis.  A Tiare flower was even given to me as I went through immigration on arrival in Tahiti.  (Hawaii immigration take note!)  The Tiare flowers are also put to use to freshen the air in restrooms throughout the islands.   Party or hotel hosts have an attractive small arrangement of Tiare by the sinks to greet guests using the toilets.


Many new comers to Hawaii get excited about being able to now grow tropical flowers.  The first one they all seem to want to grow is the Gardenia.  If they are growing it our part of the island they will find that over several months their new plant just dies.  The leaves will turn yellow and get covered in sooty mold and aphids.  This is because Gardenias need rich soil to grow and in our town the soil is mainly composed of coral sand....high in calcium and low in iron.  However, this is just the sort of soil that  the Tiare is happy to grow in.  They will also tolerate salt winds too although I am not sure I would put it right on the beach.  It does need plenty of water to be healthy and produce lots of leaves and flowers.  So if you have sandy soils you can still grow Gardenias.....only it is the Tahitian Gardenia.

The Tahitian Tiare is well known throughout the Pacific Islands but some of the islands have their own form of Tiare. eg. the Cook Islands.  Even here in Hawaii, we have the Na'u which is a Hawaiian species of Tiare.  Only now is it starting to show up in nurseries and gardens as it is being brought back from the brink of extinction.  It is thought by some that the Hawaiian and Tahitian Tiares were all canoe plants taken out to the Pacific Islands by the Polynesians.  A lot of attention is shown to canoe plants like Taro and Breadfruit but I am willing to guess that those Polynesian women going out on the voyaging canoes were wanting to take their favorite lei flowers as well. 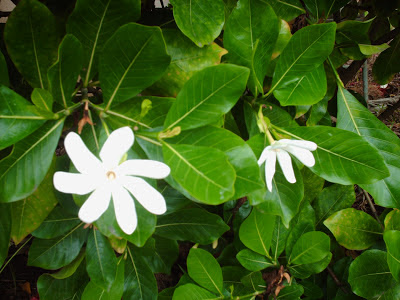 The usual form of Tiare flower has seven petals and this is the form shown on Tahiti print fabrics etc. but it can actually have anywhere between five to nine petals.  While I was traveling in French Polynesia last year I found myself counting Tiare petals everywhere I went.  I found that on Tahiti island the flower was usually seven petaled but up on Bora Bora most of the Tiare had six petals.  A few years ago I gave my daughter three of the young Tiare bushes I had grown from seed.  They now make a nice show in front of her house.  Of these three shrubs, all give seven petaled flowers but one will sometime throw out an eight or nine petal flower and another will sometimes give a six petal flower.  The third shrub is absolutely loaded with  Tiare fruits although the other two never have any.  I am thrilled to know I have a source of future Tiare seeds as Tiare fruits are hard to find although I have never been able to figure out why.  I think that the three plants all being grown from seed has helped them all be a bit alternative.....on the other hand the one in my garden, that was from the same lot, is completely normal.

I hope I have sold you on another one of my favorite hardy and useful plants to have in the garden.  I love my Tiare bush that is growing next to where I park my car.  As I head out to a baby birthday luau or a wedding reception, I will pluck a Tiare flower to tuck behind my ear to feel a little more festive for the occasion.

Posted by Stellamarina at 11:43 PM